Why Pulp Fiction is a classic 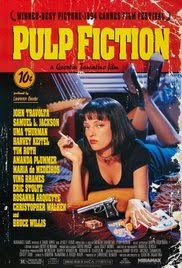 Editor’s Note: Pulp Fiction is rated “R” for strong graphic violence and drug use, pervasive strong language and some sexuality. It is intended only for students who are 17-years of age or older.

In 1992, a man named Quentin Tarantino wrote, directed and acted in a movie called Reservoir Dogs. It was a smaller movie and was his first publicly released movie. It was shown at many film festivals and won many awards. While it was a great movie, that’s not the movie I’m talking about today.

You might be thinking, “Why is he talking about a movie that’s not named in the headline?” I did that to give you perspective on how Mr. Tarantino had impacted the world of cinema. Two years later, Tarantino released his second film, Pulp Fiction. It starred Samuel L. Jackson, John Travolta and many other great actors you might recognize.

Two things before I get into my thoughts on this movie. The first is that this is a rated R movie. In fact, it’s a hard R, there is a lot of violence, profanity, and many other things that aren’t meant for a younger audience. The second is that this movie is on Netflix if you are interested in checking it out.

This movie has almost everything you would want in a movie. It has great characters, dialogue, story, moments, comedy and everything else not listed is also great. One of the best things about the movie is that it’s told out of order. It’s a few crime stories that end up crossing over with each other. Each intertwined perfectly with the other, but also leaving certain things a mystery for the audience to decide.

As an example, there’s a briefcase in the movie that they make a big deal about, but they never show what is in it. It has you wondering what might be in there that is so valuable. Another thing that is spot on in the movie is the dialogue and how the actors deliver it. There are so many memorable lines that come from this movie, and every character gets at least one or two. Plus they work so well that you can use many of them in regular conversations.To me, the best lines come from Samuel L. Jackson.

This was crazy because this film ended up being many people’s favorite film and ended up winning many awards, including the Oscar for Best Screenplay. This was crazy because no one had seen anything like this before. It’s the film that put Quentin Tarantino on the map, and to this day he’s still known as one of the most well-received and phrased filmmakers of all time. Go and check it out for yourself. You won’t regret it.