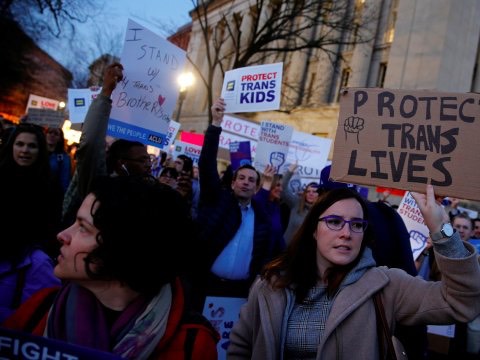 Recently Donald Trump set new guidelines preventing transgender people from using the bathroom of their preference. This caused quite a stir amongst the transgender community who felt this was an attack on them. Not many in Congress had sided with Trump adding that it could bring trouble.

In my opinion Trump has gone too far interfering in problems that already had a solution. Now with all he’s done we have more angry communities feeling disrespected. He’s taking blows to everyone, it seems.

Transgender people being allowed to choose which restroom they preferred was a problem already solved by Obama. It’s not right that transgenders have to feel discriminated once more all because of one man who saw it as “problem.” Transgender people have as much of a right of having the same freedoms as us and this has been going on for a while now. Their concerns are that people may feel uncomfortable around them but that’s simply no excuse.

Throughout the day we go through situations that may make us feel uncomfortable but that doesn’t mean we’re going to start making laws against them.

Transgenders have a valid reason for protesting this based on the fact that on the side of tormenting others, Trump now is going for things that go against everything we believe in this country. There is no liberty as it seems. We follow rules that are absurd at times and laws that don’t have any reasoning backing them up, but since Trump isn’t happy he feels the need to change things up.

Finally I believe we should protest this even more. It’s like segregation to some length, we are separating people based on their gender preference which is unfair to transgender people. I hope they really resolve this quick because hate is not what we need at a time like this.