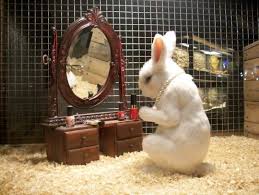 When we promote “animal rights”, are there instances where we are restricting human rights? “The question is not, Can they reason? nor, Can they talk? But, Can they suffer?” Jeremy Bentham posed this question in his Introduction to the Principles of Morals & Legislation.

Most people do not believe animals are on the same ¨level¨ as human beings; they feel that animals are not on the same intellectual level as humans with no self-awareness. However, animals can and do feel suffering psychologically and physically. The government should have a stronger control on how and why animals are used for experimentation because non-animal testing methods do exist, animal cruelty is inhumane and many experiments fail resulting in money loss.

Today, about only four percent of women around the world consider themselves beautiful, but these women aren’t necessarily the ones to blame for buying animal-tested products. However, there are many brands who try to re-evaluate their products such as Colgate-Palmolive. The company claims they will be gradually changing their policy. PETA states that Colgate-Palmolive is “working toward regulatory changes to reduce the number of animals used for testing.”

Although other companies such as L’Oreal could be to blame for the production of animal cruelty products, the considerable main culprits responsible for the continuation of this cruelty is the government. The Animal Welfare Act, a law signed in 1966 by the federal government, regulates the treatment of animals in research, exhibition, transport by dealers. However, this law is the window that allows animals to be burned, shocked, poisoned, isolated, starved, forcibly restrained, addicted to drugs, and brain-damaged.

Animal experimentation is not limited to only one type, but to a multitude of methods.

There are many different ways scientists experiment such as toxicity, skin and eye irritation, and carcinogenicity tests.

During the practice of all of these testing methods, the animal is forced to be exposed to the testing substance. The results usually consist in severe harm or complications to the animal.

But, it does not have to be this way. There are other alternatives of testing other than animals as subjects such as “tests using human cells and tissues (also known as in vitro methods), advanced computer-modeling techniques (often referred to as in silico models), and studies with human volunteers.” (PETA Alternatives to Animal Testing)

Instead, companies could use test substances from human tissue rather than an animal’s tissue. Well why would we even want to?

Well for starters: conducting tests while using a different species that clearly does not carry the same biological features as humans do, keeping them captive in an unnatural and stressful environment, and trying to apply the resulted issues concerning diseases in human beings is unreliable.

According to The National Institutes of Health (NIH), ninety-five percent of all substances that are claimed “safe and effective in animal tests fail in human trials because they don’t work or are dangerous and, of the small percentage of drugs approved for human use, half end up being relabeled because of side effects that were not identified in tests on animals.” (PETA)

This has been proven to be true due to the popular drug called Thalidomide. This drug was very popular in the 1950-1960s which was famous for easing nausea particularly in pregnant women. The drug was deemed safe for everyone since it was tested and effects were not shown in animals, but eventually the drug created serious birth defects.

Unfortunately many children were born with a birth defect called Phocomelia; which can cause the upper limbs, the bones of the arms, and other parts of the body to be extremely shortened and/or even absent. The fingers of the hands may even be fused together.

Why do we still continue to test drugs on animals knowing this incident occurred and affect so many mothers and their children? Testing human cells would be more accurate and no one has to die or experience antagonizing pain. In addition, cruelty free products do not contain unknown or harmful chemicals, and scientists tend to get inaccurate results when testing on animals.

Animals are exploited to fulfill our human needs because some feel superior. But to be human is to have or show compassion. This is the idealistic human image yet most of the human race does not possess these qualities.

Clearly, I can not speak for the majority of the human race, but I feel that if we were as a nation to work harder to fight for these animals it would not only reflect on our morals, but we would be saving lives. I feel that one of the main reasons why this is still occurring is not specifically because some people do not care, but it could be simply a lack of knowledge.

During testing, animals “endure severe abdominal pain, diarrhea, convulsions, seizures, paralysis, or bleeding from the nose, mouth, or genitals before they ultimately die or are killed.” (PETA Product Testing: Toxic and Tragic). Possibly, if society was more aware of the severity of animal experimentation and the effects these tests have on animals, we would see a decrease in animal tested products.

Why is this an accepted type of cruelty and inhumane behavior by many in society? In addition, the lingering question to many animal rights activists remains: why are rights traditionally limited to only humans? Human rights have been primarily based on the concept of natural law. According to natural law, “human beings are automatically, inherently, and creatures of dignity and worth traditionally by God.” That being said, if the roles were reversed and humans tested on other humans without their consent, this would be considered manslaughter and also a violation of the law.

Every year, these testing methods add up to roughly millions of dollars. Most importantly this does not include the amount that is actually donated to these companies as research. Genuinely billions of dollars are spent on animal testing/experimentation, when in sense, the government could improve homeless shelters, welfare programs and healthcare and even school environments and curriculum!

Sadly, every year roughly 100 million animals are killed during experimentations. and this may never change unless society becomes more aware of not only the dangers of animal testing to humans, but also the inhumane treatment of animals.