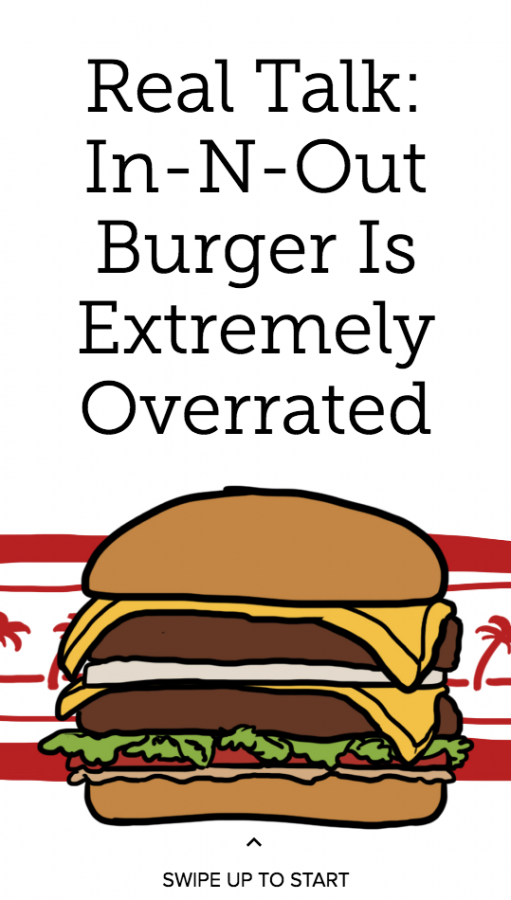 In-N-Out often times has been labeled a must-visit place for any state that has one. Many individuals throughout my stay in America have gone as far as swearing on their life, expressing just how “amazing” and “a must” the burger joint is. Despite this however, I truly don’t see it living up to the expectations that many people hype it up to be.

After having a first hand look at the restaurant, it’s undeniable that the burgers they sell are great, but at the same time, it’s really nothing all that special from other burger places. For a burger place that has so much hype surrounding it, I can’t help but feel a little disappointed just because of the fact that there’s so many restaurants with better burgers (i.e. Steak & Shake).

The experience was one where there was so much hype surrounding the establishment that I had to go back multiple times in hopes of maybe seeing something new the next time. It just seemed so off. A part of me was always hopeful that maybe it would blow me away the next time. Sadly, there has not been a point in time in which that occured, if anything it was just recurring disappointment.

“Although I feel like it’s overrated and the food isn’t that good, I do believe that it reaches its hype since everyone is always wanting to get it,” Agua Fria student Rochelle Peterson stated.

On paper, this establishment held the best possible American burger from a fast food joint in my eyes: the Double-Double. Why? Because of the amount of hype that everyone puts on it.

“Personally their burgers doesn’t really have a good taste and their fries are just overall bland,”

Peterson continued. “It’s overhyped because there’s only a couple of those places around here plus it just gives off that ‘phat’ vibe.” Peterson ends expressing how the hype is mostly driven by the culture.

Hit or miss, but they always seem to miss…

“I’d say their burgers are pretty good but their fries are easily their weakness. I still eat them, but I have to put salt on them or else I can’t get myself to even grab them,” Isaac Vera, Agua Fria student said, expressing his personal opinion of the menu. He elaborates, explaining how bland the food can get and take a bit of effort just to get into.

The burger served is good, but it’s fairly generic, and the only pull it has is its animal style variant. (“Animal style” means the fries are topped with cheese, spread and grilled onions). Meanwhile, the fries, oh the saddest thing ever since the death of the king of pop. It’s just something that’s so tasteless and lacks any flavour. Plus ordering them extra crispy just to make them firm is just too extra.

Ordering the fries animal style makes them taste better, however, the fact that this is the only way to increase the quality of the fries is disappointing and quite frankly a waste of money.

“I think the In-N-Out franchise is super iconic for their burgers and their whole ‘not your typical fast food joint’ vibe. I’d say I keep In-N-Out is pretty high up on my list,” Vera stated initially but also emphasized how he “feel[s] like the hype it has is definitely too high, due to Instagram and Snapchat being constantly bloated with pictures of their burgers.”

Bottom line is that I’ll most likely continue to visit In-N-Out hoping for a change, possibly reaching the mind-blowing factors that everyone seems to hype the place up for. Although at this point, it’s been pretty clear to me that it’ll just reach the same old disappointing “okay burger” and “bland fries.”

With the amount of excitement enveloping the establishment at this point, I might be the one who is missing something or, hell, maybe I’m just wrong. It’s a weird feeling to have because often times I feel like I’m the odd one out.

However, there’s nothing that exempts In-N-Out from other fast food places in regards to the food that they dish out. Yes, service is a whole different topic but solely speaking about the food it’s really nothing but another mediocre burger joint with a high cultural following.