OPINION: Thanksgiving is the Most Ignored Holiday 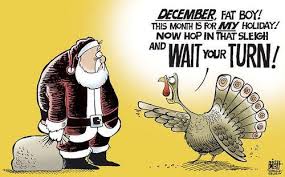 Thanksgiving, the holiday of family, food, and stating the reason why we are all thankful. To some people, Thanksgiving is a time where everyone can feel grateful and realize why their life is amazing, however, some people don’t think that the holiday is all that it is cracked up to be. This is the case considering that radio stations, major companies, and in general, the people of the United States seem to ignore this holiday, but why?

Every November it seems to be the same story, you spend October 31st trick or treating, eat a bunch of candy then as soon as midnight hits you start to play Mariah Carey. However, what are some factors that make people not want to celebrate Thanksgiving?

There’s no advertisement anywhere. No companies talk about this holiday as most corporations would rather skip ahead to Christmas to produce content about getting presents and holiday shopping. Rather than talking that, they would spik to the day after such and Black Friday and its sister holiday Cyber Monday.

Most people blame the food fest for being gluttonous or just an excuse to “pig” out, however, this can be applied to other holidays. Halloween, the holiday before, has adults give out candy and lets them eat them all night, while Christmas, the holiday after, celebrates with a big feast as well, the only thing is its not a major part of the holiday. However, the thing is why to they fault Thanksgiving when there are holidays that does the same thing.

However, the main reason why people seem to ignore Thanksgiving is probably the fact that some people believe it to be boring or unentertaining. Each holiday has something to do, such as minuscule holidays such as Valentine’s Day, where a couple could spend a day together, even April Fool’s day could make a splash with the potential of the ultimate prank ever.

Some people argue that Thanksgiving is a holiday where you just eat and that you are stuck spending time with your relatives.

Although there is the elephant in the room, that some people do not want to celebrate since it’s horrible past of the abuse of Indigenous Americans. The origins of Thanksgiving is that an indigenous person named Squanto came to help the Pilgrims after that harshest winter ever as he taught them survival techniques and how to help their crops. Thanksgiving was originally a feast that was in his honor, however, became annually after the next year when Squanto died.

However, some people dislike the blatant cultural appropriation where people wear headdresses, multiple feathers, and paint themselves red and orange to look like Native Americans. While some people can admit that the mistakes that people have treated the Indigenous People before, it still makes people uncomfortable to celebrate it.

Thanksgiving may be a peaceful and loving time to many people like me, where we believe its only about how grateful we are and that at heart it’s about family, but there are multiple factors as to whyy people typically try to skip over Thanksgiving.

So get another pair of sweatpants ready to try to eat your brains out and try to enjoy a holiday that no one can remember, or just skip it as everyone else does. Happy Thanksgiving everyone!