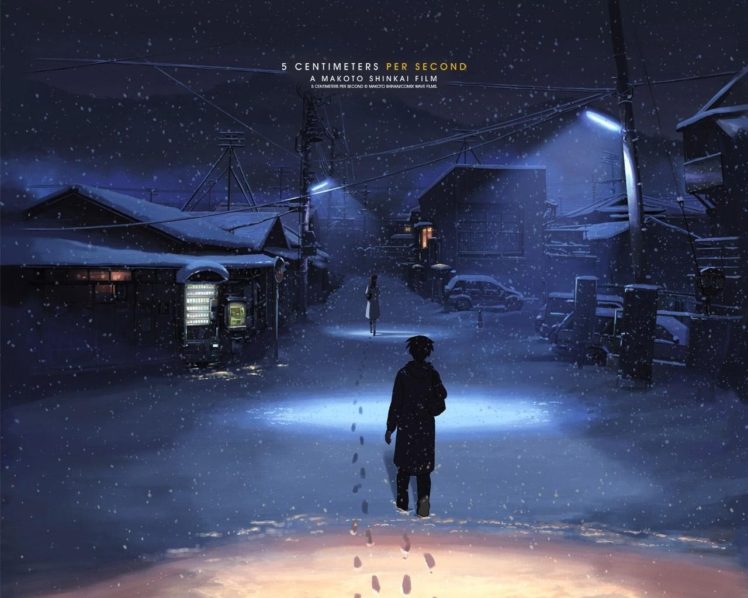 It’s here, at last, the coldest month of the year again and I can just imagine sitting on the couch or lying in bed, snuggled up with blankets and pillows with hot chocolate, coffee or any warm delicacy.

But, if you’re like me and you’re planning on binge-watching during your lazy winter days or whenever you’re free this month, then here’s a list of winter-themed animes that will certainly have you merrily watching.

The short backstory depicts that long ago, humans lived beneath the sea using a

protection called “Ena” that allowed them to breathe underwater. However, evolution took its course and soon they began to abandon living underwater permanently to live on the land and, over time, lost their Ena.

However, there were those who stayed underwater and, because of this, the rift between the denizens of the sea and of the surface widened, but there was still contact between the two civilizations.

A Lull In the Sea follows the story of Hikari Sakishima and Manaka Mukaido, along with their childhood friends Chisaki Hiradaira and Kaname Isaki.

The conflict begins to rise when the children are forced to leave the sea and attend a school on the surface. There, the group also meets Tsumugu Kihara, a fellow student and fisherman, who loves the sea.

Hikari and his friends’ lives begin to change as they face discrimination and hatred from the land citizens, creating storms in their personal lives. Meanwhile, beneath the surface of the land, an impending tempest spins doom for the surface citizens

Takashi Natsume is NOT a regular 15-year-old, instead of having regular hormonal problems, well, Takashi has a peculiar and terrifying secret involving demons. For as long as Takashi can remember, he’s been constantly chased by these spirits with no known reasoning.

Takashi soon discovers that his deceased grandmother Reiko had passed on to him the Yuujinchou, or “Book of Friends,” which contains the names of the spirits whom she brought under her control.

Now in Takashi’s possession, the book gives Takashi this power as well, soon leading the demonic beings to now haunt him in hopes of somehow finally getting the peace and freedom they desire.

However, Takashi is not alone in this journey. His only companion is a mysterious, pint-sized feline spirit who has his own reasons for sticking with Takashi as his “bodyguard.”

The story follows the friendship of our two main characters, Takaki Toono and Akari Shinohara. The conflict arises as the dynamic duo faces being torn apart when Akari’s family is transferred to another region of Japan due to her family’s job. Despite the separation, they continue to keep in touch by sending letters to one another.

Soon Takaki finds out that his family is also moving, so he decides to reunite with Akari one last time.

As the years pass by, the pair continues down their own paths, their distance slowly growing wider and their contact with one another fading. Yet, the two keep remembering one another and the times they have shared together.

However, in both of their minds the same thought lingers…Will they have the chance to meet once again?

This short series follows the sweet and bitter love story of our protagonist Dejiko. Our story unfolds on Christmas day, with Dejiko working part-time in a bakery shop. After closing up shop and proceeding to head home, Dejiko runs into a young man- Senba Taokuo at a park. Shortly after Dejiko begins to see the young man more and more and as their relationship develops, she looks forward to every meeting. However, out of the blue Taobao visits Dejikos little shop. What’s with this sudden drop in?

Have you ever held a deadly grudge against someone after being the victim of an injustice? Well, the Hell Correspondence is here to serve your justice. This anthology series follows individuals with a powerful grudge accessing the mysterious website of the Hell Correspondence at midnight, allowing them to enter anyone’s name and have that person be ferried straight to hell by the mysterious and beautiful Ai Enma, the “Hell Girl.”

But, there is just one catch—after the user enters a covenant with Hell Girl she will give them a straw doll with a red string. The user must untie the string for their grievance to be answered. However, after their grievance is avenged they must hold up their end of the bargain that of which is the user condemning themselves to an afterlife in hell.

But, of course, that is after you die.

In this action-packed series, family comes first, always! Ever since the death of his father, the burden of supporting the family had fallen upon Tanjirou Kamado’s shoulders. Despite living a poor life on a remote mountain, the Kamado family enjoys a relatively peaceful and happy life.

One wintery, cold day, Tanjirou decides to go down to the local village to make a little money selling charcoal. On his way back, night falls and the winds get colder, forcing Tanjirou to take shelter in the house of a local village man, who warns him of the existence of man-eating demons that lurk in the woods at night.

The next day, Tanjirou finally arrives home but is met with a horrifying sight—his whole family has been slaughtered. Worse still, the sole survivor is his sister Nezuko, who has been turned into a bloodthirsty demon.

Consumed by rage and hatred, Tanjirou swears to avenge his family by joining the mysterious demon-hunting group called the Demon Slayer Corps. But, despite Nezuko being a demon as well, Tanjirou stays by his only remaining sibling, concealing her demon status from the hunters.

Tanjirou will do whatever it takes to slay the demons and protect the remnants of his beloved sister’s humanity.

In a heartwarming story of family, Hana, a hard-working college student, falls in love with a mysterious man who attends one of her classes, though he is not an actual student.

As it turns out, he is not truly human either. On a full moon night, he transforms, revealing that he is the last werewolf alive. Despite this, Hana’s love remains strong, and the two ultimately decide to start a family.

Hana gives birth to two healthy children—Ame, born during rainfall, and Yuki, born during snowfall—both possessing the ability to turn into wolves, a trait inherited from their father.

However, tragedy strikes when the sudden death of her lover devastates Hana’s life, leaving her to raise Ame and Yuki completely on her own.

The stress of raising her wild-natured children leads Hana to decide to move from the city to the countryside, where she hopes Ame and Yuki can live a life free from the judgments of society.

In a peculiar world, Mushi are the most basic forms of life in the world. They exist

without any goals or purposes aside from simply “being.” Mushi exist in countless forms and are capable of shapeshifting to mimic things from the natural world such as plants, diseases, and even rainbows!

Although in this world of Mushi, humans are unbeknownst to the existence of these entities.

So what are Mushi and why do they exist? This is the question that a “Mushishi,” Ginko, ponders constantly. Mushishi are those who research Mushi in hopes of understanding their place in the world’s hierarchy of life. Ginko chases rumors of occurrences that could be tied to Mushi, all for the sake of finding an answer.

It could, after all, lead to the meaning of life itself.

Adapted from its predecessor- a Korean drama with the same name, Winter Sonata follows the young girl Yoo Jin falling in love with Joon Sang but after losing Joon Sang in a horrible accident she decides to move on and marry a childhood friend. However, shockingly, out of the blue Yoo Jin meets a young man who resembles her lost love exactly, and, with this encounter, Yoo Jin begins to spiral as she deals with her past feelings and memories flooding back.

The backstory follows a post-apocalyptic world, where there exists an ancient legend depicting that when the world ends, the gateway to “Paradise” will be opened and this Utopia is the sole salvation for the bits of life remaining in this barren world. However, the legend also dictates that only wolves can find a way to this Paradise. Although long thought to be extinct, wolves still exist and live amongst humans, disguising themselves through remarkable illusions and posing as regular humans.

A lone wolf named Kiba finds himself following an intoxicating scent leading to Freeze City (an impoverished town under the rule of the cruel Lord Orkham). Here, Kiba discovers fellow wolves Hige, Tsume and Toboe have been drawn to the city by the same scent.

Their companionship journey begins as they follow the scent of the Lunar Flowers, said to be the key to opening the door to Paradise. Ensuing, the wolves set off on a journey across dying landscapes and deteriorating cities to find their promised Paradise.

However, they aren’t the only ones seeking this Paradise… and those with more ominous intentions will do anything in their power to reach Paradise first.